Natural Horsemanship has been instrumental in my own personal development journey as well as the development of our horses. In 2003 we bought Saeta, a half-Arabian grey mare who was dangerously unpredictable, and, yes, beautiful. When her previous owners gave up on her, she was taken to the slaughter house but, thanks to her good looks, one of the employees sold her on to a dealer, and then she came to us. Ah Saeta! 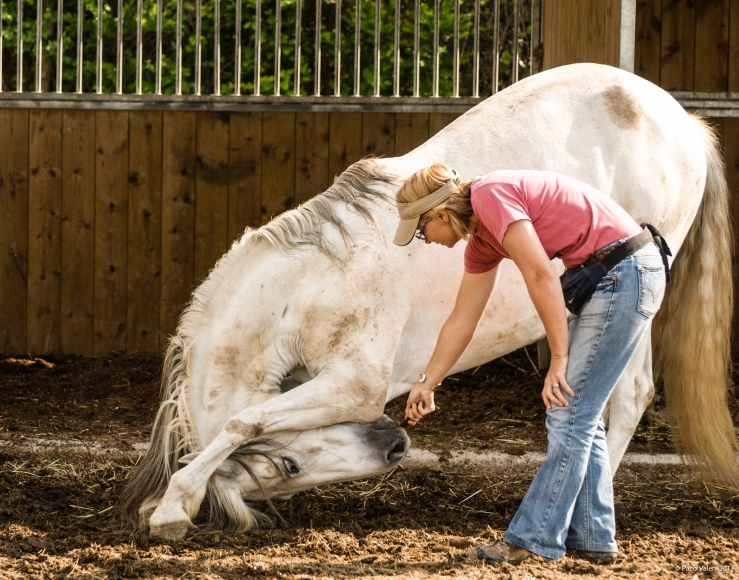 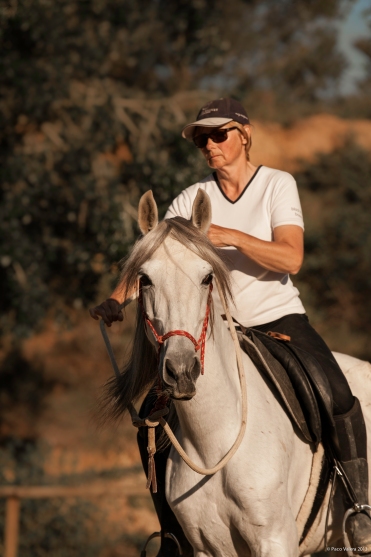 We discovered that she had been isolated for long periods of time, badly treated, then discarded. Other horses, and even foals, distanced her and treated her aggressively not trusting her energy. To Saeta, attack seemed to be the best form of defence – she could be sweet and friendly until asked to do something: then the self-preservation instinct took over and her repertoire of dangerous coping mechanisms came into play – keeping herself safe by putting me into the firing line!

No amount of carrots or soothing could convince her to feel safe with me; even though I had worked with racehorses and trekking horses for 10 years as a youngster, I knew I was way out of my depth with Saeta. What she needed was a good dose of empathy alongside solid, trustworthy leadership mixed with an ever-increasing load of evidence of consistently reliable and fair treatment. After a year of getting nowhere with her, I desperately needed some real horsemanship knowledge, tools and techniques.

Thus began my journey with Parelli Natural Horsemanship: my path towards becoming a horseman, and the rehabilitation of a very distressed, wounded horse. More on our journey follows a brief description of the natural horsemanship system we use.

There are many schools of horsemanship around the world, all of which have their origins in the human cultures that needed horses to do what we wanted or needed them to do. Traditional horsemanship, for example, emerged from the military model, which relied on a strict leadership hierarchy to structure roles and relationships, and a single methodology to train and prepare hundreds of horses and soldiers for the battlefield within a matter of months. In bygone days only Knights were thought to have the temperament for developing the partnership needed to forge a fighting partnership.

Natural horsemanship, by contrast, has its origins in the Central and South American vaqueros or cowboys, some of which migrated north into what is now California and Arizona. They brought with them their characteristic “let’s take the time it takes” attitude to developing a partnership with their horse, usually over many years, to train and prepare their workmate and their friend for the arduous and dangerous work of ranch life.

Training Humans to Be The Best They Can Be

The most highly developed system of natural horsemanship today is Parelli Natural Horsemanship (PNH), firstly because it is as much a system for training humans as it is for training horses, and secondly because it is a highly structured educational system as well as an experiential process in which the development of the horse can only take place if the human is equally able to modify his predatory attitudes and capabilities for dealing with the horse as a prey animal. The founder, Pat Parelli, has found a way to shape alternative human attitudes to horses, such as showing how to start a horse, not break a horse and to start a relationship to forge a partnership. ‘Horses don’t care how much you know’ he says, ‘until they know how much you care’.

Pat Parelli was himself mentored by several of the descendants of, and other mentees of, these pioneering vaqueros. He is known for having distilled a Philosophy and guiding Principles for natural horsemanship that inform and underpin everything in the training programme that horses and humans experience in their journey from training for basic safety and confidence through to the highest levels of performance in all horse disciplines. The emphasis is on avoiding rigid thinking and being willing to adjust to fit the situation, whilst having a clear goal and a progressive attitude. “There are no rules – only a philosophy and guidelines.”

The 7 Games are the trademark of Parelli’s programme, in which the trainer uses and shapes the natural games or behaviours that are seen when horses communicate with each other in horse herds. This means the system of communication used between horse and trainer makes perfect sense to the horse, enabling horse and human to share and understand the same ideas. When the horse and human can play the 7 Games with mutual rapport and respect, and with the human claiming 51% in the leadership equation, then the partnership will be strong, effective and progressive. Ultimately each Game, or interaction, involves the application and release of pressure (mental intention and/or physical touch) such that the appropriate amount of pressure is applied when something is requested, and the pressure is immediately withdrawn when any attempt is made to respond (“pressure motivates, the release teaches”). This is the basis for teaching and learning that horses use with each other, and that we humans use in our everyday lives.

Another major contribution to the understanding of horses is the concept of ‘Horsenality’, (akin to our personality) in which the essential nature of the horse is revealed according to his innate characteristics (eg. cart horse vs racehorse), the behaviour he has learned (good and bad), the environment (scary or safe) and spirit (his natural energy level). These facets lead to horses being generally either confident in nature or reactive in nature, (known as operating in their left brain or right brain state respectively), plus, horses generally tend to be either introverted (think before they move) or extroverted (move before they think).

These criteria produce 4 horsenalities: the Left Brain Introvert, the Left Brain Extrovert, and the Right Brain Introvert, the Right Brain Extrovert. A horse’s Horsenality is his general state of mind and his general repertoire of behaviours: this is who his is. However circumstances may change his state of mind depending on what he is perceiving, so his training will require a repertoire of strategies appropriate to the situation and his general development. This has been an immense breakthrough in the horse training world, proving that there is no ‘one size fits all’ approach to training that suits every horse – just like people, they are all different, and what works with one horse in one situation won’t necessarily work with all horses in a different situation.

The Parellis (Pat and his wife Linda) have designed a systematic distance learning programme for all horse enthusiasts to follow, supported by a worldwide network of Parelli Professionals and a social network with educational back-up called Parelli Connect. The world of horse training is organised into 4 disciplines or ‘Savvys’ known as On-Line (using lead lines of varying lengths), Liberty (no lead lines or equipment of any kind), Freestyle (riding on a loose rein) and Finesse (riding with contact using the bit). Each Savvy is taught over 4 levels of competence. The Parelli system is becoming widely recognised as a foundation programme that “puts a foundation” on the horse, meaning teaching the horse the basics up to and including Level 4 in all 4 Savvys, at which point he can then continue his training in whatever chosen field of professional performance e.g. jumping, dressage, reining, etc. A ‘Horseman’ is defined a someone who has demonstrated that he can operate at level 4 in all 4 Savvys.

The Mission of the Parelli Organisation is
…to help raise the level of horsemanship worldwide
for the benefit of horses and the people who love them.

There are over 200,000 members of Parelli Connect; the Professional Instructor Programme and courses for enthusiasts are organised by the Parelli Education Institute which operates over 4 campuses in the USA, the UK and Australia; there is also a Parelli Natural Horsemanship Foundation which is a charity dedicated to helping young people access scholarships as well as helping rescue centres and institutions offering therapeutic and para-equestrian riding.

Saeta and I were together for 4 years before she died unexpectedly from what we think were complications from on-going problems with colic. During that time we had many highs and lows, but gradually, as I became more familiar with the PNH system and acquired more Savvy, our relationship strengthened to the point where she and I could, and did, trust each other entirely: we were true partners. Eventually, when I worked out her Horsenality (Left Brain Introvert) and realised that she used all the Horsenalities when stressed or asked to learn, I was able to work out the right strategies for her and every play session became a high. When children came to visit the stables she would gladly carry them bareback round the arena, giving them what I hoped would be exactly the type of thrilling excitement I had felt as a kid when I smelled, touched and rode a horse for the first time, and my passion for them was ignited for life. We miss her to this day, she was my partner, and her sudden loss left a big space no other horse can fill in her way. I continually thank her for being a patient teacher, and at the same time for pushing me up the learning curve and teaching me everything I needed to know to be her partner and leader.

Blog at WordPress.com. | The Designfolio Theme by Press Coders