This is our exuberant chestnut, Kairos. We’ve had him for nearly six years since he was a youngster of about three. He is a mixed breed combining some Spanish and some Pyrenean breeding, so he is heavy boned and immensely strong. Yet he is  surprisingly agile – he really loves to move his feet and to play hard. He is a contented, confident horse, easy to get along with and he is always willing to do new things. He is very curious by nature, very playful and he likes being with people and enjoying fun and treats.

Gandalf was born and bred at Els Xops, www.equivet.es, and was given to us by the owners following the unexpected death of Saeta, one of our two horses at that time. He is our youngster, and is the kind of horse who gets along with all the other horses as well as with people because he knows how to keep out of trouble, even though he is often the cause of it! He is extremely smart and able to figure out puzzles and challenges so quickly that we have to be several steps ahead of him. He uses his energy strategically and finds ways to have everyone else doing the work – except himself! 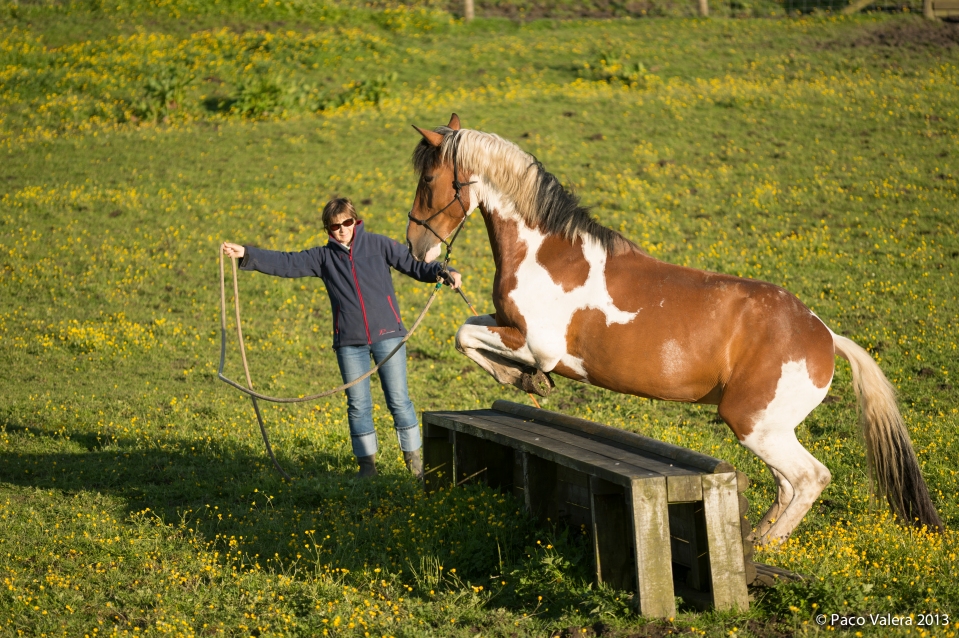 Zen is a sport horse, bred to jump and compete in events. But under that outer shell is one of the most sensitive horses imaginable. As a youngster, his traditional training was too intensive for him and his owners became disappointed when he got fearful and claustrophobic when asked to ride out and jump. Seeing the horse in difficulty, a couple who were dedicated to Natural Horsemanship bought him, and soon convinced him that he could enjoy doing things with humans and relax at the same time. Zen has taught us the art and science of sensitivity: that he’ll be our partner as long as we ask him to do things gently – with only the slightest suggestion – and that he needs our leadership to help him regain his confidence when it falters from time to time. Now, Zen shows off his stylish breeding by jumping, going for rides in the Yorkshire Dales National Park, playing at liberty and on line with lots of confidence and great athleticism. A joy of a horse! 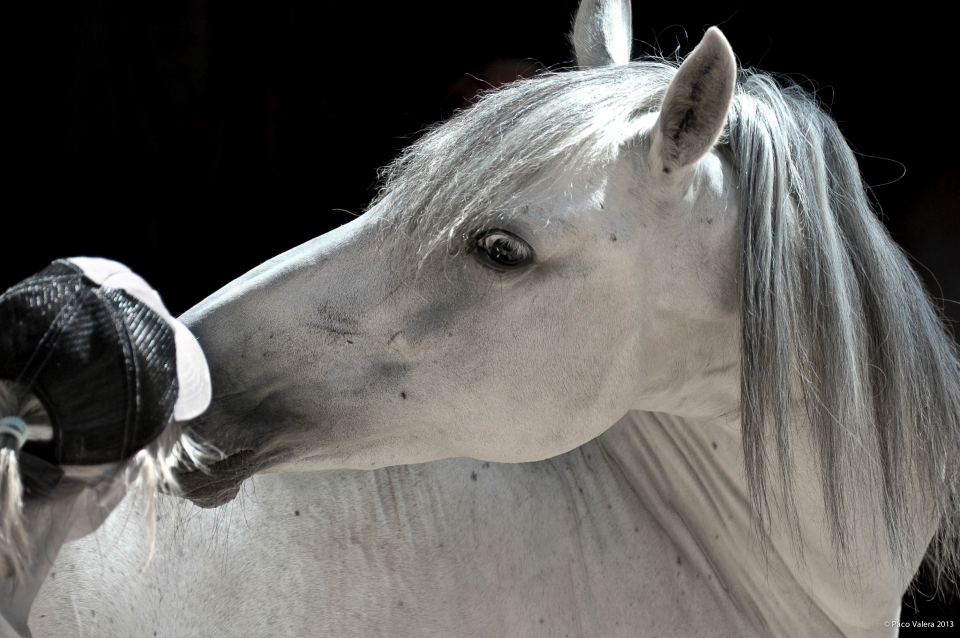 Saeta was the horse that fulfilled Barbara’s lifelong dream of one day owning a horse. However that dream initially became a nightmare, because Saeta came with a vast repertoire of dangerous and defensive behaviours that took us a few years to understand, then to learn how to address, finally with the help of Parelli Natural Horsemanship. Then, this beautiful, grey, part-Arabian mare revealed her true nature:  she was a sensitive, curious, bonding and trusting mare. Little children could ride her bareback around the arena, whooping for joy and asking for more and Saeta would offer as much as they wanted!  Much of Saeta’s life had been overly stressful for her, as she had a lot of anxiety-related stereotypical behaviours that gradually lessened as she grew more confident and trusting, and found herself living on more natural surroundings. However, her anxiety-related stomach issues and colics were a recurring problem, and sadly she died unexpectedly – we think from a colic attack during the night. She is greatly missed and it’s thanks to her that we learned so much so quickly about how the true nature of a horse hides behind behavioural problems, and how little by little it can be coaxed to come out and express itself to the max.

Within two weeks of Barbara finally owning her first horse, Paco had to have one too, and Merlin came into our lives. Only three years old, he was already ‘broken’ and was called ‘Speedy’ because of his tendency to move  – fast. Thanks to Parelli  Natural Horsemanship, this unwanted tendency was soon forgotten, and other challenges of a positive sort emerged: we discovered that we had on our hands one of the most playful, energetic, curious and fun-loving horses imaginable. Easily bored, he would find his own ways of amusing himself especially at the expense of us humans who were so easily duped by his cute antics. Merlin taught Barbara the fun side of training, and kept her guessing what the next game was going to be. He was only 5 when one day he was galloping round the arena in full exuberance, and we think a blood vessel broke somewhere  – he suddenly fell to the ground and died. He is very much missed and we know he would have loved teaching our clients how to ‘get it done with a lot of fun!”

Blog at WordPress.com. | The Designfolio Theme by Press Coders